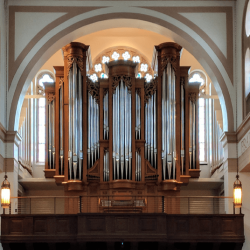 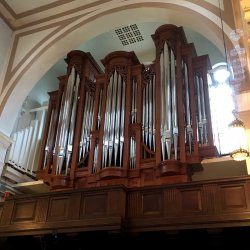 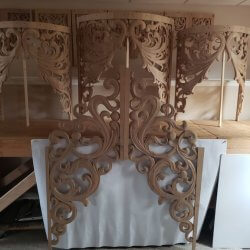 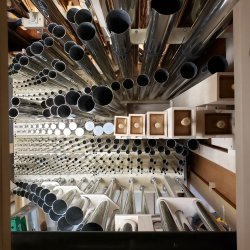 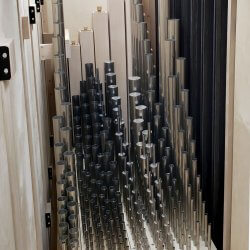 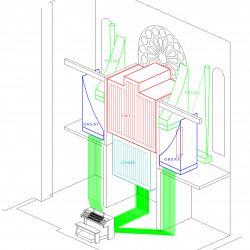 After the fire that devastated St. Peter’s in 1940, a pipe organ was installed. Limited by the resources of the time, it was assembled from used parts and did not benefit from the coherent tonal and mechanical design that a new instrument could bring. Building a new organ for St. Peter’s in the 21st C has allowed us to rethink the project from scratch.

The generous acoustics of St Peter’s allowed us to envision an instrument that takes some of its roots from the French repertoire, something which is not often possible in the usual intimate acoustics of American churches. To make this happen, we were excited to team up with Bertrand Cattiaux, France’s premier voicer, who has been responsible of some of the most prestigious projects in France, from Notre Dame, Paris to the Chateau de Versailles.

The tonal architecture was built over forty-seven stops, three manuals, and pedal. French scaling and voicing techniques were used as the basis of the tonal approach. The foundations are rich, but sing in a more relaxed manner than, say, a German organ. The flutes are generously scaled leading to lyrical Cornets and luscious Harmonic Flutes. The reeds, many of them copied from Cavaillé-Coll models in France (including the Choir Clarinet replicated from the Clarinette 16′ in Notre-Dame in Paris), provide the fire and the excitement that crowns the instrument.

On the technical side, the 1940 reconstruction of the church left us with a thorny problem: two 22′ tall vertical brick partitions set against the back wall on either side of the rose window had to remain for structural reasons. These walls (with their associated concrete shelves that can still be seen on either side of the new organ) create three independent compartments on the gallery: a daunting layout for a new instrument whose foremost role is tonal cohesiveness. The challenge was further heightened with the desire for a mechanical key action for this new instrument. Last but not least, there was no wish to expose the unsightly brick partitions.

With some creativity, the brick walls were used internally to provide solid, and therefore very efficient, enclosures for the two divisions under expression (Swell and Choir). The Great and Pedal were divided on the outer compartments. The generous acoustics of St Peter’s then allows these sounds to meld.

The case design set in Classical style follows the architectural language of the church. It is made of solid white oak crafted according to traditional woodworking methods. Repositioning the instrument in the center allowed the re-opening of the two side lancet windows bringing light to the gallery.